Port Townsend poet Stan Sanvel Rubin will read on Tuesday, November 5, from There. Here., his collection from Lost Horse Press. Writer Linda Bierds has noted that the primary subjects of Rubin’s volume are “silence and sound.”

This free event, the third in the 2013-2014 series sponsored by North Coast  Writers, takes place at Wine on the Waterfront, 115 E. Railroad Avenue in Port Angeles and will begin at seven.

Rubin is a founding director of the low residency MFA Program at Pacific Lutheran University in Tacoma.  Previously, he taught at SUNY Brockport, where he directed the Writers Forum and Videotape Library, and won the Chancellor’s Award for teaching excellence.

Rubin’s work has been published widely in such journals as Poetry Northwest, Kenyon Review, Cutthroat, and the Georgia Review.  His poems have also appeared in the anthology, Long Journey:  Contemporary Northwest Poets, published by Oregon State University Press.  Moreover, Rubin is the author of The Post-Confessionals, interviews with contemporary poets.  He regularly writes review-essays for Water~stone Review, published by Hamline University.

Poet Naomi Shihab Nye has called the works in Rubin’s second volume, Hidden Sequel, “fine, compelling poems . . .  that move with unobtrusive delicacy and deep grace through the mysteries of time.”

Posted by Sequimarian at 5:05 AM 0 comments

Submitting to Mount Hope
Posted by Sequimarian at 6:32 AM 0 comments

Medium Is Now Open To Anyone With Twitter & A Modern Browser

Medium Is Now Open To Anyone With Twitter & A Modern Browser
Posted by Sequimarian at 5:45 AM 0 comments

EAB Publishing seeks short stories and non-fiction of no more than 5000 words, mixed-media, and poetry for Midnight Circus. Each issue of Midnight Circus has a theme which can be found here. Writers wishing to submit stories and/or poems must adhere to that theme if they wish EAB Publishing to take their submissions seriously.
EAB is currently closed to novel, novella, collected works, and chapbook submissions. We are open to artists interested in publishing graphic novels or submitting art for book covers for Midnight Circus. Artists interested in submitting a portfolio should contact us at eabpublishing@aol.com
EAB Publishing will not consider pornography or gratuitous violence. We’re not prudes. We understand sex happens and violence occurs in real life. Therefore, it may in your work, but there better be a damn good reason for it or chances are we will pass on your submission.
Please send all properly formatted submissions to eabpublishing@aol.com
Posted by Sequimarian at 6:34 AM 0 comments

The Fourth Friday Readings in Sequim will feature author/poet Patrick Loafman on October 25 at 6:00 p.m. at Rainshadow Coffee Bar, 157 W. Cedar Street, Sequim.  The event is hosted by Writers on the Spit.

Loafman is a wildlife biologist, author, artist and musician, living west of Joyce on The Dandelion Farm. He will read from his recently published novel, Somewhere Upriver (Event Horizon Press, 2013).  His short story collection, A Freckle Shaped Like California, is forthcoming.

Patrick has been published in over twenty journals and two published chapbooks. He is editor of an online poetry journal, The Dandelion Farm Review and balances his writing time with surfing, skateboarding, gardening and making music on gourd banjos, thumb pianos and the mandolin.

We're in for a treat, as he tickles our ears with his readings AND a bit of music from his kora -- a twenty-one-string harp/lute that looks something like a hybrid between a gourd banjo and a suspension bridge. The kora is a West African instrument that has been around for over three hundred years.

Admission is free. Readings begin at 6:30 p.m., but you'll want to arrive by 6:00 to choose your favorite seat and order your treat for the evening. The Fourth Friday Readings include an hour of Open Mic readings from the audience. Those interested may put their names in to be drawn for a five minute reading. For guidelines contact Rmarcus@olypen.com. 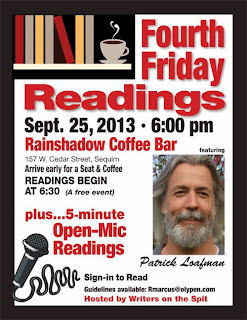 Posted by Sequimarian at 6:21 AM 0 comments

How to Use Microsoft Word Text to Speech to Read Out Loud | eHow
As a creative writer, I use speak feature in Word to hear my work as I am polishing it and proofing it.
Posted by Sequimarian at 10:18 AM 0 comments

Submissions | the red line
Posted by Sequimarian at 6:34 AM 0 comments

Submissions « A Story In 100 Words

Submissions « A Story In 100 Words
Posted by Sequimarian at 4:42 PM 0 comments

Thank you. If you have poem that that you would like to submit and you feel that it "fits" the character and color of this BLOG, send it in for reading. We publish all kinds of work. Contact us: thomaspitre AT gmail DOT com

Who is Thomas Pitre

Retired educator and trainer, having worked in adult ed., private vocational ed, community colleges, colleges and university environments lecturing, developing and writing curricula and delivering on-line training in a variety of subjects.
Tom has a B.F.A., M.A. and Ph.D. His undergraduate work was in English, Education, Fine Art and Art History.
Graduate work included Painting, Photography and English, while Doctoral work emphasized business and vocational education.
Tom lives quietly, with his dogs, electronics and graphics tablet in Washington, on the Olympic Peninsula.

If I discover one of your pieces on line, I will email you for permission to publish your poem or short, flash prose. You will be credited of course, and your work will become part of this BLOG's archived postings.
Please DO NOT send any unsolicited work.

2011, Thomas Pitre, Sequim, WA. Unauthorized use and/or duplication of this material and any material in this BLOG without express written permission from the BLOG publisher or author is strictly prohibited. Excerpts and links may be used, provided that full, clear credit is given to Thomas Pitre at fifthcoffee.blogspot.com with appropriate and a specific link to the original content.

A Poet's Work - by Baad the Poet in Salman Rushdie's book, The Satanic Versesr

A poet's work is to name the unnameable, to point at frauds, to take sides, start arguments, shape the world and stop it from going to sleep.

The same should be said of conscientious BLOGGERS, all journalists, teachers, coaches, mentors, guides, pastors and parents. -tp. Aug., 2010

Disclaimer of Warranty
You expressly agree that use of the Site is at your sole risk and discretion. The Site and all content and other information contained on the Site is provided on an "AS IS" and "AS AVAILABLE" basis without warranty of any kind, whether express or implied. Fifthcoffee makes no warranty that (I) the Site and content or information will be uninterrupted, timely, secure or error-free, (II) the results that may be obtained from use of this Site will be effective, accurate or reliable. The Site may include technical mistakes, inaccuracies or typographical errors. Fifthcoffee reserves the right to change the Site content and information at any time without notice.

Limitation of Liability.
In no event shall Fifthcoffee or its affiliates be liable for any indirect, incidental, special, punitive damages or consequential damages of any kind, or any damages whatsoever arising out of or related to your use of the Site, the content and other information obtained therein.

Certain jurisdictions prohibit the exclusion or limitation of liability for consequential or incidental damages, thus the above limitations may not apply to you.

Governing Law.
Any disputes arising out of or related to these Terms of Service and/or any use by you of the Site shall be governed by the laws of the United States, without regard to the conflicts of laws provisions therein.

Date of Last Update.
This agreement was last updated on August 21, 2012.